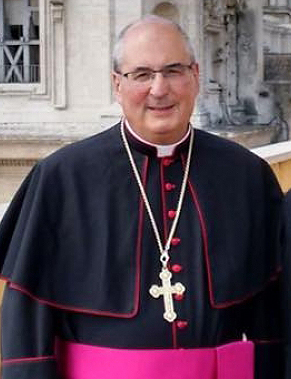 On the Feast of St Mungo, first Bishop of Glasgow, the death has been announced of his 40th successor, Metropolitan Archbishop Philip Tartaglia.

A spokesperson for the Diocese of Glasgow said, “Archbishop Tartaglia had tested positive for COVID-19 shortly after Christmas and was self-isolating at home.  The cause of death is not yet clear. “

Bishop Stephen Robson, Bishop of Dunkeld, has called for prayers for the repose of the soul of Archbishop Tartaglia and has expressed his condolences to the priests and people of Glasgow.

“It is with deep regret and sorrow we learn of the death of Archbishop Philip Tartaglia, Archbishop of Glasgow.”

“Archbishop Philip was a wonderful man – a wise, kind, and loving Shepherd, and great company.  He will be greatly missed by all his brothers in the episcopate and priesthood, and by the faithful men, and women and young people of the Archdiocese of Glasgow on this their Patronal Feast Day of St Mungo.”

“He had a close and loving family, including his own priest brother Canon Gerard Tartaglia of St Margaret’s and Our Holy Redeemer’s Parish in Clydebank.  The family recently lost one of their dear sisters, Dina RIP.  Our heartfelt love and prayers surely go out to them all today on this saddest of days.”

Archbishop Tartaglia was born on January 11th, 1951 and he was the eighth Roman Catholic Archbishop of Glasgow since the re-establishment of the hierarchy in 1878 following the Reformation. He was installed on 8 September 2012, the Feast of the Nativity of the Blessed Virgin Mary. He has been described as a conservative in religious and moral issues. He was previously the fourth Bishop of Paisley, a post to which he was appointed by Pope Benedict XVI on 13 September 2005. With the resignation of Cardinal Keith O’Brien in 2013, Pope Benedict XVI appointed Philip Tartaglia as the apostolic administrator of the Archdiocese of St Andrews and Edinburgh on 27 February 2013.

Born in Glasgow, the eldest son of Guido and Annita Tartaglia, and Philip had three brothers and five sisters. He is of Italian descent. After his primary schooling at St Thomas’, Riddrie, he began his secondary education at St Mungo’s Academy, Glasgow, before moving to the national junior seminary at St Vincent’s College, Langbank and, later, St Mary’s College, Blairs, near Aberdeen. His ecclesiastical studies were completed at the Pontifical Scots College, and the Pontifical Gregorian University in Rome.

Tartaglia was ordained priest by Archbishop Thomas Winning at the Church of Our Lady of Good Counsel, Dennistoun on 30 June 1975. He then returned to Rome where he completed his ordinary course of studies in 1976 before beginning research for his doctorate in Sacred Theology. In 1978 he was additionally appointed as dean of studies at the Scots College in Rome, and was also acting vice-rector at that time.

After obtaining his STD degree in 1980, on the Council of Trent’s teaching on the Eucharist, he was appointed assistant priest at Our Lady of Lourdes, Cardonald, while at the same time becoming an extramural lecturer at St. Peter’s College, Newlands, Glasgow.

He served as rector until 1993 when he was sent to St Patrick’s, Dumbarton, as assistant priest before being appointed parish priest of St Mary’s, Duntocher in 1995. In 2004 the Bishops’ Conference of Scotland asked him to return to seminary as rector of the Pontifical Scots College, Rome.

In 2008, as president of the National Communications Commission of the Bishops’ Conference of Scotland, he wrote to every parish in Scotland decrying the media for pushing a “secular and humanistic agenda”. Arguing his belief that “over two-thirds” of Scots are actually Christians, and that the proportion of people who work the media does not reflect this, leading to a “fundamental disconnection between the provider and the consumer”.

On 24 July 2012 the Holy See announced the appointment of Bishop Tartaglia as Archbishop of Glasgow to succeed Archbishop Mario Conti. He took possession of the diocese on 8 September 2012, the Feast of the Nativity of the Blessed Virgin Mary. And on 29 June 2013, Archbishop Tartaglia received the pallium from Pope Francis at a Mass in St Peter’s Basilica, Vatican City, on the liturgical Solemnity of Saints Peter and Paul.

In a statement from the Bishops Conference of Scotland, “It is with the deepest sadness that we have learned today on the Feast of St Kentigern (Mungo) of the death of our brother bishop and friend Philip Tartaglia. His loss to his family, his clergy and the people of the Archdiocese of Glasgow will be immeasurable but for the entire Church in Scotland this is a day of immense loss and sadness. He was a gentle, caring and warm-hearted pastor who combined compassion with a piercing intellect. His contribution to the work of the Bishops’ Conference of Scotland over the past sixteen years was significant and we will miss his wisdom, wit and robust Catholic spirit very much.”