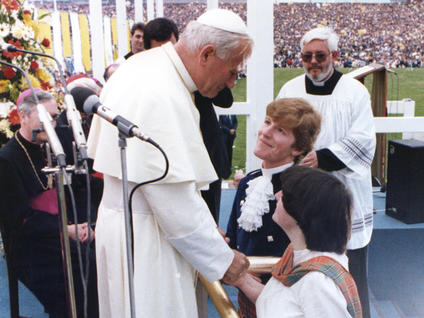 FR DAVID Ward, a priest in the Dunkeld Diocese for almost 50 years, has died after a long illness. He was 72.

Born in Dundee, the son of Francis and Agnes Ward, his family moved to Broughty Ferry shortly afterwards. He was educated at Lawside Primary and Lawside Academy.

He began his studies for the priesthood at the then national junior seminary, Blairs College, in Aberdeenshire. He then spent six years at the Royal Scots College in Valladolid, Spain, where he was ordained in 1962.

His parish ministry began when he was appointed assistant priest in St Serf’s, High Valleyfield.

He served many parishes throughout the diocese, and for many years was based in St Andrew’s Cathedral, Dundee where he was also the Catholic Chaplain at Dundee University.

In 1982 Fr David was appointed Master of Ceremonies for Pope John Paul II’s Mass for the Young Catholic of Scotland at Murrayfield, Edinburgh

The final years of his ministry were in Perth, at Our Lady of Lourdes, and he retired from there through ill health in 2005.

Fr Ward is survived by his brother Gerald and his family.