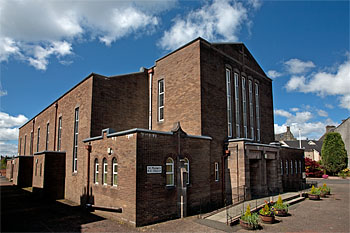 The Vigil and Reception of Remains of Mgr John Harty was held in St Mungo’s Church, Alloa at 6pm, on Wednesday, 27th January, 2021.

Due to the Covid virus restrictions the number of participants at all ceremonies were restricted to 20.   Priority was given to Mgr Harty’s family, parishioners and invited priests from the Deanery, together with his closest friends in the priesthood.

A large number of parishioners gathered outside St Mungo’s, Alloa, for the Requiem Mass which was celebrated at 10am on Thursday, 28th January, 2021. The road was then lined by parishioners after the Mass as the funeral cortege set off for Mgr Harty’s burial at Wellshill Cemetery, Perth.

Both services were followed livestream on the Dunkeld Diocese website, and a fuller recording will replace the livestream later in the day.