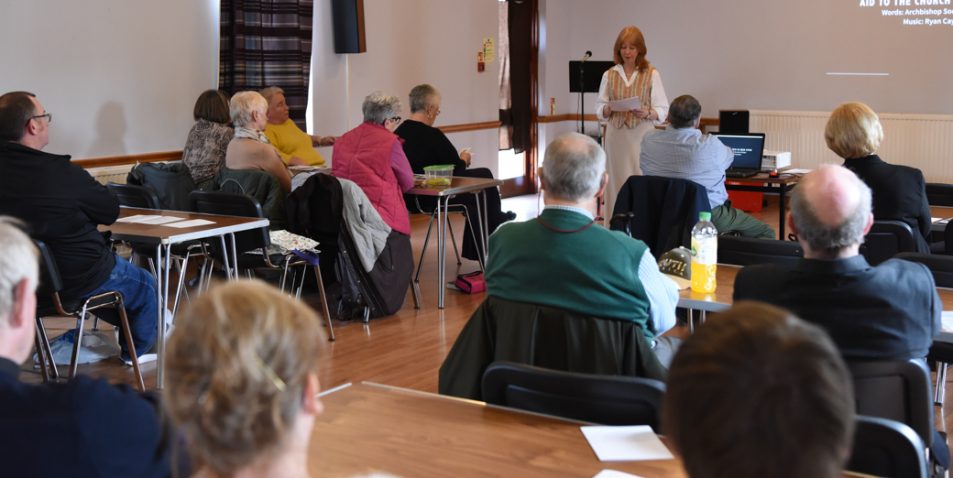 Sponsored by the Knights of Saint Columba, St Mungo’s, Alloa, held a Mission Day on 29th February 2020. The speakers were Fr Dorin (Mill Hill Fathers) who gave a talk on Mission Life in the Philippines, Falkland Islands & Africa.

He was followed by Clare Fulton from Aid to the Church in Need (ACN) whose talk addressed the subjects of Christian persecution and refugees. Aid to the Church in Need a Pontifical Foundation of the Catholic Church, operating directly under the Holy See and we are passionately committed to supporting fellow Christians throughout the world who are being persecuted or oppressed because of their faith.

Aid to the Church in Need prioritises help in countries where the need is greatest.  Every year we fund over 5000 projects in more than 145 countries around the world.

Because of its infrastructure and organisation Aid to the Church in Need is able to reach people at grass roots level where the need is greatest throughout the world.  The many, many countries in which ACN is working are listed on our website with stories of aid, help and hope.

Aid to the Church in Need came into being in 1947 when a young priest, Father Werenfried van Straaten – whose name means “Warrior for Peace” – responded to an appeal for reconciliation made by Pope Pius XII in the bitter early years after World War II. He set out to organise emergency relief to meet the material and spiritual needs of the suffering German people.

With the help of thousands of concerned and compassionate people, his impassioned preaching and calls for reconciliation touched hearts – and supplies of clothes and food poured in – particularly sides of pork –thus earning him his nickname, the Bacon Priest.

At the same time, recognising a deep spiritual hunger, he launched a ‘Rucksack Priest’ campaign to send priests out on motorbikes, and in Volkswagen Beetles, to people still displaced, bereft and in need of spiritual comfort. This was soon followed by a Chapel Truck initiative using decommissioned army trucks which were adapted as mobile chapels from which Mass could be said.

In the 1950s, Father Werenfried worked tirelessly to assist religious serving within Communist countries, especially in Hungary, to help contemplative Sisters in Poland and to launch a massive aid campaign. His passion and commitment helped Aid to the Church in Need to build what were known as “fortresses of God” – churches constructed along the length of the Iron Curtain. From this time onwards he began his drive to bring Christ not only to Russia and Eastern Europe, but to all those being “tested in faith” around the world. Aid to the Church in Need began to grow in size and scope and is now working in over 145 countries.

Bringing us up to the present day Pope Francis spoke about martyrdom, saying:

“To find martyrs we don’t need to go the Catacombs or the Colosseum: Today martyrs are alive in a great many countries.  Christians are persecuted for their faith.  In some countries they cannot carry the cross:  They are penalised for doing so.  Today in the 21st century our church is a church of martyrs”.

My role within the organisation is to approach priests across Scotland to ask them to host a weekend appeal.  There are 3 Area Secretaries in Scotland and we each have a territory in which we work.  I am fortunate that Dunkeld Diocese is part of my area and that so many of our priests are so very supportive of the work of the charity.

I never ask to return more frequently than every 3 years as I am only too well aware of the many demands made of our priests and the challenges they face in accommodating both the compulsory second collections and the requests of the many Christian charities carrying out God’s work.  That said, there are some priests who invite me back before 3 years have elapsed and for this I am most grateful.

When making an appeal I attend all the Masses in the parish over one weekend.  During each Mass I speak for no more than 7 minutes about the work of Aid to the Church in Need, ask people to support us through prayer, by making a donation to the organisation or by purchasing one of the many items we have for sale at the back of the church after Mass.  One of those items is the Child’s Bible.  A tiny, red, well-recognised publication, we sell them for £3 and for every Child’s Bible sold here 2 are given to children in developing countries . . . so you can see how news of God’s word and our faith are spread.

Travelling around Scotland it is truly delightful to meet so many warm, generous, giving parishioners and to have the great privilege of getting to know so many of our priests so well.  My huge thanks go to every one of them who has generously opened his heart and his door to our organisation, to make sure that those who suffer oppression and persecution because of their faith are never forgotten.  Heartfelt thanks too go to Bishop Steven Robson and Mgr Harty and all the other priests who always welcome ACN with open arms and who have supported and encouraged our work, especially within Dunkeld Diocese.

Our newsletter, entitled “The Mirror” gives the latest reports about the extremity and severity of persecution about which we read but to which we are fortunately not subjected.  Some horrendous reports can be read on our website but there are also so many stories of faith, hope, love and strength.   You can also sign up online to receive “The Mirror” newsletter.  There is a copy for everyone here today.

I’d just like to share with you a short text and a letter from a past copy of “The Mirror” newsletter.

Father Frans van der Lugt, hanging on in Homs, was staring martyrdom in the face but when ACN eventually managed to get through to him on the phone he said, “We are not thinking of martyrdom.  We are trying to find solutions for the most urgent needs.”

And that is exactly what he did do, thanks to the help of the many benefactors of ACN – until he was finally martyred on 7 April, 2014.  Islamist extremists dragged the 75 year old Jesuit priest out onto the street and shot him dead.

For over 50 years he had borne witness to the love of Christ among the suffering people in Syria – latterly in the embattled city of Homs, where he stayed behind with the last dozen or so Christians, while telling ACN, “I do not see Muslims or Christians, but only human beings.  I am the only priest and the only foreigner in this place, but I do not feel like a stranger”.

Stories such as this are not necessarily reported by the mass media but it is important that we are kept informed about what is really happening in our world today so that we can pray and take action wherever and whenever possible.

I spoke earlier about the infrastructure and organisation of Aid to the Church in Need which makes it possible for us to reach people at grass roots level where the need is greatest throughout the world and this is done by sisters as well as priests, bishops and lay people.  With the resources and funds provided by ACN they do what needs to be done in their community.

In recent times much of our help has gone to Africa and the Middle East – between them they received over half the total aid paid out both by the UK office and internationally.  In these regions the needs of Christians are growing and we have been able to help directly through their local Church.

One of ACN’s key concerns was repairing and rebuilding the homes of Christians in Iraq – Christians who had been driven out by extremist group ISIS.  Another was emergency aid for Syrian Internally Displaced People and refugees.  In 2019 and 2020 our aid for the Christians in the Middle East, especially in Syria, will continue to be absolutely necessary.  At the same time there is still a pressing need to continue supporting the Church’s catechetical mission in Asia where persecution is rising and in Latin America where the activities of various sects are causing harm to the faithful.  Through prayers and donations we can support the work of Aid to the Church in Need.

Every two years ACN produces the report “Persecuted & Forgotten” which tells the real stories of what is happening to fellow Christians through the world.   I have with me today copies of the latest edition if you would like to find out more.

At home too, as refugees and migrants arrive in our country and we now have a growing number of Syrian refugees here in Scotland, we can also welcome them into our communities to share their talents, skills and experiences.

For children and young people, the Scottish office of ACN has created the “Maisy Milk” campaign in which we ask schools and parishes to fill empty one pint milk cartons with spare coins to raise funds to support our work.  Further details are available on our website.

For schools too we have the #50MileChallenge.

On 6 August 2014 the plain of Nineveh in Iraq was overrun by the forces of IS.  An estimated total of 100,000 Christians left their homes in the region of Nineveh in an exodus of apocalyptic proportions, fleeing in the direction of Erbil.  People walked from as far as Mosul to Erbil in Northern Iraq – a distance of 50 miles – to reach safety.  This challenge asks school pupils to “walk in their shoes”.  A school, a class or an individual can seek out sponsorship to walk, run, row, swim or cycle 50 miles to raise funds for Aid to the Church in Need.  Again further details can be found on our website.

Finally, just  before we end may I ask for your prayers.

The first is for Father Yeyock who was in St John’s Church when the Islamist Fulani herdsmen started shooting at unarmed parishioners at Mass.  They ran in fear for their lives.  Today, they still live in fear and travel to their farms in groups.  These ongoing attacks have had a deep impact on the Church in Nigeria.  Father Yeycock asked ACN for support saying, “I ask you to join me in prayer for peace for all Nigerians.”  ACN is supporting suffering priests in Nigeria.

The second is for Leah Sharibu, a 15 year old Christian who was one of the 110 students kidnapped from a girls’ boarding school in Dapchi city, north-east Nigeria in February 2018.  Five of the students died after they were seized.  After a month, 104 of the young hostages were released but to this date Leah remains captive because she has refused repeated attempts to force her to convert to Islam.  ACN is supporting the Church in Nigeria with key projects.

The third prayer is for Catherine Ibrahim.  As the extremist group Boko Haram entered Catherine’s village she ran home to rescue her children – but it was too late.  She was dragged away and forced to witness as they murdered her husband.  She also saw her children captured and taken away.  She was finally reunited with her children in a displacement camp run by the Catholic diocese of Maiduguri which is supported by ACN.

And the final prayer is for John Abba.  During Mass, a car smashed through the wall of a church in North Kaduna, Nigeria and John Abba was blinded in one eye and covered in shrapnel wounds in the bomb blast that followed. He said,  “They thought I would never see again but here am I looking at you.  They thought that they could do away with us but we are still standing, giving thanks to God.”  ACN is supporting the faithful in Nigeria as they carry the cross of persecution.