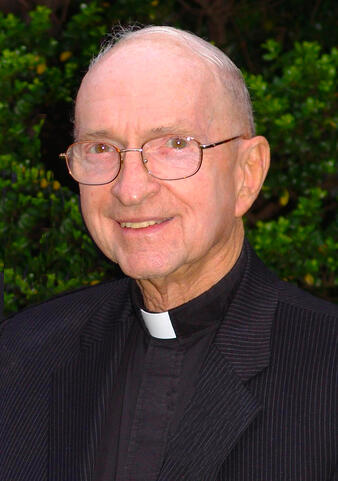 Monsignor Thomas A. Kleissler, who launched a parish-renewal program that turned into an international movement, died on Tuesday February 2, at St. Catherine Healthcare Center, Caldwell, N.J. He was 89.

Father Tom, as he preferred to be known, co-founded RENEW International, which has been serving Catholic parishes for more than 40 years with processes that help the laity, meeting in small Christian communities, assume roles of leadership and service in the Church.

Fr Tom visited Dunkeld Diocese in the 1990s, at the invitation of Bishop Vincent Logan, to launch the RENEW programme in our diocese.

Born in Newark, Father Tom attended Seton Hall Prep and Seton Hall University and the Seminary of the Immaculate Conception, Darlington. He was ordained at Sacred Heart Cathedral on May 25, 1957.

From the beginning of his work as a pastor in the Archdiocese of Newark, Father Tom promoted lay participation in the life of the Church.

In 1976 Archbishop Peter L. Gerety asked him to develop the Office of Pastoral Renewal, which encouraged the formation of parish councils, and worked to engage the laity in a deeper relationship with the Lord. Then, together with the late Msgr. Thomas Ivory, he founded the original RENEW process in the archdiocese and was appointed its director.

Under his leadership, the mission grew beyond the original RENEW experience, developing RENEW 2000, Healing the Body of Christ (in response to the sexual-abuse crisis), Why Catholic? and many other programs for small Christian communities.

These processes have reached over 160 dioceses in the United States and 140 dioceses in 24 other countries. Father Tom traveled extensively to plant seeds of RENEW’s message of conversion and community in North and South America, Europe, Asia, Africa, and Oceania.

“Father Tom’s legacy is not about a program or an organization but about a way of renewing faith, building communities of hope and gospel action, and transforming the Church and the world,’’ said Sister Terry Rickard, OP, president of RENEW. “It is largely because of his vision and his work that diocesan spiritual renewal, parish small groups, faith-sharing, and faith-based action are part of the fabric of Catholic life.”

Michael J. Brough, originally from Falkirk, and formerly RE Teacher at St Columba’s High School in Perth, was a colleague for Fr Tom for many years.

He said: “Fr. Tom was my boss, my mentor, and my friend. He was a faithful, brilliant, and dedicated priest whose ministry touched the lives of millions of Catholics around the world. His vision for pastoral and spiritual renewal – with every parish as a community of many small communities – called forth the leadership of lay women and men to transform our families, parishes, communities, and world.”

“In our final conversation we talked about his beloved NY Giants and Yankees and he inquired about each member of my family – always his priority. Tom shared that he was at peace and looking forward to being with God. His final message to me reflected the way he lived his own life and his ministry as a priest: Keep the same zeal and active faith to the end.”

“May you rest in peace, Fr. Tom, good and faithful servant.”