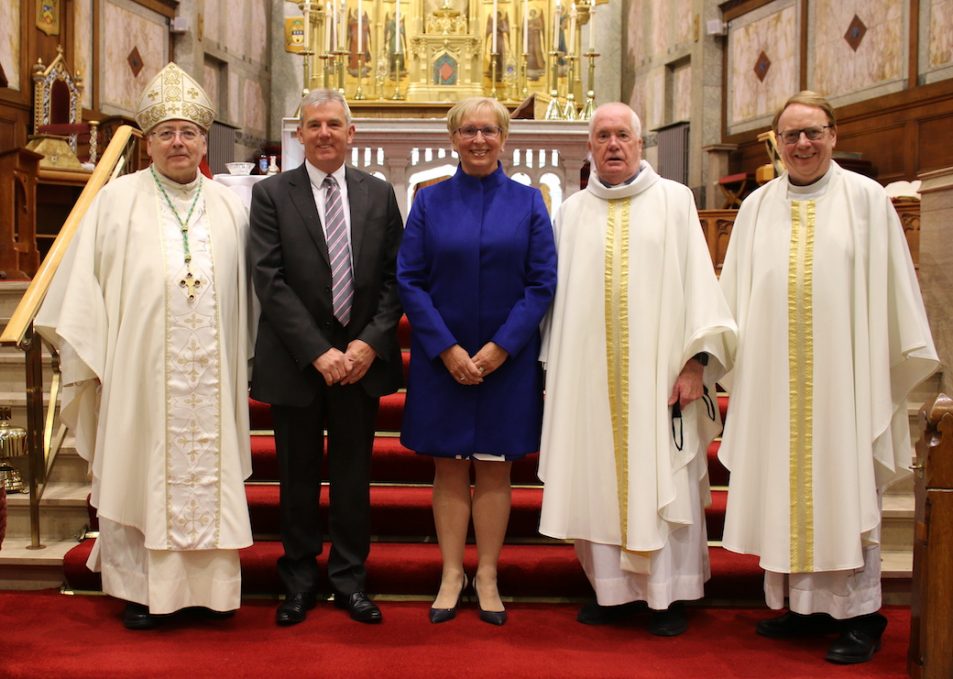 The annual Mass for teachers in Dunkeld Diocese, due to have taken place in February this year, was postponed due to the lockdown. Finally, on Thursday 3rd June, the teachers were able to come together to reflect on what has been one of the most difficult times for both staff and pupils in our Catholic Schools and across the whole education sector. It was time too to pay tribute to the great service of Mrs Fiona McLaggan, who retires at the end of this terms as Headteacher at St John’s High School, Dundee.

Fiona qualified as a Teacher of Physical Education in 1979, graduating with a Batchelor of Education in Physical Education from Dunfermline College for PE in Edinburgh. Her first teaching post was at Lawside RC Academy in Dundee, where she worked until the closure of the school when it merged with St Saviour’s RC High School to become what is now St Paul’s RC Academy.

She was promoted to Principal Teacher of PE in 1990 and was the first female PT of PE in Dundee.  She has always been forward thinking, continually striving to do the best for her young people.  If there was a new initiative, Fiona volunteered to push it forward, serving on many National Working Groups.  She was, and still is, passionate about her subject and was determined that her young people should, and would, be awarded qualifications for their talents and hard work in sport. As Principal Teacher, she was the driving force in the department’s introduction of SCOTVEC Modules, Standard Grade and Higher PE. And, of course, with her background in Dance, there was also a place for Higher Dance on the curriculum too!  She was also, a prolific badminton and hockey player, performing at District level.

Fiona was promoted to Assistant Head Teacher and Depute Head Teacher during her time at Lawside Academy.  She then moved to the new St Paul’s Academy as DHT.  During this time, among her many roles, she looked after Primary 7/S1 Transition and the S6 year groups, developing our future leaders, some of whom have gone on to following in Fiona’s footsteps in the vocation of teaching.  Fiona is a constant reminder to us that this is a vocation not a job.

Fiona served as a member of the Transition Team whose role was initially to merge Lawside Academy and St Saviour’s High School and then to establish, and launch, the new St Paul’s Academy.

When she joined Lawside Academy, Fiona was a member of The Church of Scotland but during her time in Lawside, she fully embraced Catholicism and she made the decision to convert.  She was received into the Church at SS Peter and Paul at the Easter Vigil on 31st March 2002 along with Ian, Rachel and Daniel.

During her time at Lawside Academy, Fiona was involved in many fundraising events, from starting a tuck shop and organising dinner dances raising money for a school mini-bus, to our Global Citizenship Project, “The India Village Project”.  She worked closely with Brother Douglas and Charlotte Jones on this project and continues to do so.  This project continued to grow when we moved to St Paul’s Academy and continues there today.

In 2010, Fiona travelled to India with Mrs Leck, Charlotte Jones and a group of senior pupils.  They visited the Marist Brothers to assess the project and decide what St Paul’s could do to support the village of Mangamanuthu and its secondary school.  This led to houses being built for the villagers; the assembly hall in the high school being furnished with exam desks; the purchase of sewing machines and materials so the women in the village could make school uniforms for the children; and the Marist Brothers from India visiting our schools in Dundee.

When she returned from India, Fiona organised a very important trip for the staff and pupils of St Paul’s.  On Thursday 16 September 2010, we travelled to Bellahouston Park in Glasgow to celebrate Holy Mass with the Holy Father, Pope Benedict XVI.  She and the management team ensured the maximum number of staff and pupils had the opportunity to attend this event.  We were issued with our Pilgrim Pack and St Paul’s scarf and, after watching the Holy Father arriving at Edinburgh Airport on television, we set off for Glasgow.  This was a memorable and uplifting day for staff and pupils.

In December 2010, Fiona was appointed Head Teacher of St John’s RC High School.  Over the years, as the Marist Brothers moved on from St John’s, the school’s Marist identity had been lost. When Fiona took up her post, she was determined to rectify this. Fiona’s vision was to re-establish St John’s Marist identity and re-connect The Family of St John’s with the Marist Community. With the help of Brother Douglas and Brother Brendan, she re-established links with Marists across West Central Europe and worldwide.

Fiona continued to support The India Village project when she moved to St John’s, much to the delight of Brother Douglas.  He identified a school in Piu which The Family of St John’s now supports.  Fiona is a Trustee of the India Village Project, a role I am sure she will continue to deliver when she retires.

Fiona has many talents but one which never fails to impress us is her talent which results in people agreeing to do whatever she asks of them. It is very impressive. She will discuss an idea she has had and before you know it you have agreed to support another of her projects or initiatives.  This could be a working group or a discussion about taking young people to India. Before you know it, suitcases are being packed and passports looked out.  Everything she does is for the people around her. She has created many opportunities for our staff and our young people.

Whilst “live teaching” was a priority for Fiona during the recent pandemic, the most important priority for her was making sure that our families were looked after, fed and warm. She did this with the financial support of our staff and their families.  Their generous donations allowed Fiona to organise for shopping to be delivered to families, and gas and electricity supplies replenished as required.Throughout her career, her passion has undoubtedly been towards the young people of Dundee.

The real successes during her career, and those which have given her most personal pride, have been those children whose educational and life journeys have seen them overcome significant personal challenges to develop, mature and achieve against considerable odds.