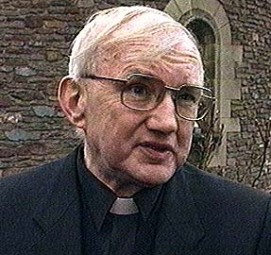 The priest who was one of the first on the scene after 16 primary one pupils and their teacher were shot dead at Dunblane Primary School is celebrating 50 years of Ordination to the Priesthood, in Holy Family Church, Dunblane, Friday, June 16, at 7.00pm.

Canon Basil O’Sullivan, parish priest of Holy Family, Dunblane and Our Lady of Perpetual Succour, Auchterarder, was on his way to a meeting in Pitlochry that fateful day 10 years ago when gunman Thomas Hamilton entered the school gym and opened fire on the class of five year-olds. On arrival in Pitlochry, Canon O’Sullivan was told of an incident at the school and immediately returned to the town. He recalls, Waiting in the school we had no idea of what was happening outside and how the school was being inundated with love and sympathy from people everywhere.

All Dunblane was being loved and prayed for by good people all over the world. People from the media would ask where God was that morning. The strange thing was that no one on the ground, the people I was dealing with, no one asked me that question. They may have asked others, but they did not ask me.

If Sacred Scripture is correct in describing God as love, then it is obvious where He was as love cascaded into Dunblane. He was in every tear shed, every candle lit, every prayer offered, every hug given, every flower sent, every message delivered to Dunblane. That is where He was that morning and in the days following.

The mourning in Dunblane turned out to be something peculiarly Scottish “ very Christian, very solemn, very restrained, very dignified. As one bereaved parent said to me sometime afterwards “ you have to cope; you have no choice. I believe Dunblane coped in a very dignified and Scottish way.

Canon O’Sullivan was born in Fishguard in Wales before his family moved to Cork where he was brought up. He was ordained for the priesthood at All Hallows College, Dublin, on June 17, 1956. He was invited to serve the Diocese of Dunkeld by the late Bishop James Donald Scanlan. His successor, the late Bishop William Andrew Hart, sent him to study Canon Law in the Gregorian University of Rome.

He has been working ever since for the Catholic Tribunal of Scotland.

His appointments have included St Joseph’s, Dundee and St Andrew’s Cathedral, where he was Chaplain to the University of Dundee for some six years, St John Vianney’s, Alva and St Columba’s, Dundee.

Canon O’Sullivan says, The parishioners everywhere have always been marvellous and supportive with love and friendship and it has been a great privilege and joy to have served the very special people of our diocese.

I have visited many of the priests who were ordained with me on that June morning in 1956, but though they may enjoy sunnier and drier weather in places like California and Western Australia, I have never ever seen any diocese half as beautiful as our own beloved Dunkeld.

I give praise and thanks to Almighty God for His wonderful works and His wonderful people. It is a special privilege to be a priest serving the Lord in his people.

Paying tribute to Canon O’Sullivan, Bishop Vincent Logan of Dunkeld, who will preside at the Mass of Thanksgiving, said, I offer my warmest congratulations to Canon Basil on this marvellous milestone in his ministry.

Over half a century he has served selflessly and faithfully in parishes throughout the diocese. And in those dark days in Dunblane, he made himself available night and day to all who needed him.
As bishop, I feel very fortunate to have his wise counsel available to me and I know, too, how much his work for the Catholic Tribunal has been valued and appreciated.

I am delighted to share this Golden Jubilee celebration with Canon Basil and I wish him Ad multos annos!