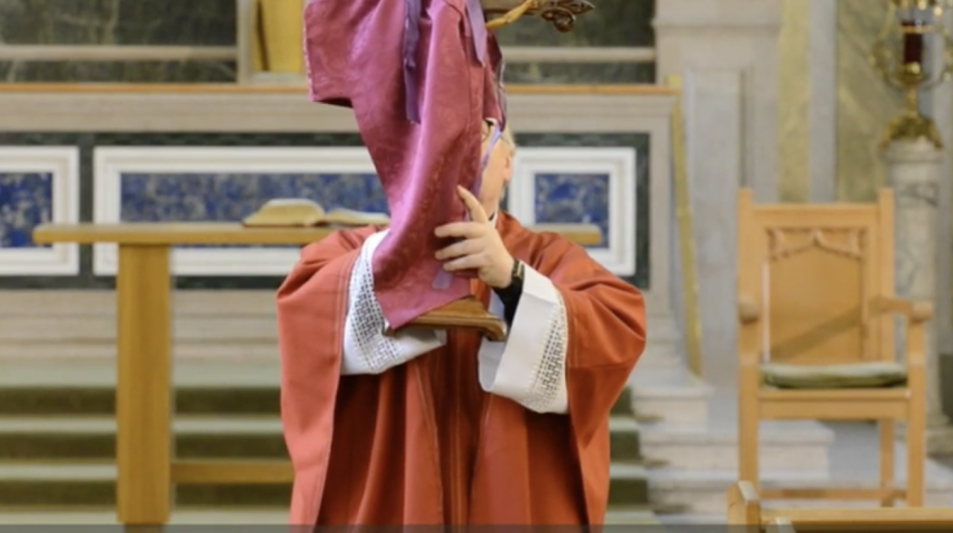 The Passion of the Lord – Good Friday

Bishop Stephen Robson conducts the service commemorating the Passion of the Lord – alone – from St Joseph’s Chapel, Lawside, Dundee. The service included the reading of the Passion according to St John’s, Prayers of Intercession, the Veneration of the Cross and a moment of Spiritual Communion for all who, at this time, hunger for the Body of Christ but are unable to partake physically.

Bishop Stephen said, “In St John’s Gospel, the evangelist does not tell us that terrible things happen to Jesus – rather he tells us how Jesus is directing the course of events. He steps up and takes the initiative leading the dialogue with the disciples, the chief priests and with Pilate. His death was not some horrific murder on a gallows, rather he offers himself in sacrifice for his people.”

“There is no ‘my God, my God, why have you forsaken me’ – rather He says ‘into your hands I commend my Spirit. It is accomplished.“

The beautiful Chapel of St Joseph’s is located at the heart of the Diocese of Dunkeld, in the city of Dundee. For over 150 years it was used by the Sisters of Mercy – and today the surrounding buildings form the Pastoral Centre and diocesan offices of Bishop Stephen Robson. The Convent is now home to Sisters of the Immaculate Heart of Mary, Mother of Christ, who have recently brought their ministry to Scotland.

The Diocese of Dunkeld is one of the eight Roman Catholic Dioceses in Scotland. Dunkeld comprises 35 parishes with over 40,000 Catholics from a total population of 400,000 (10.8%). It is served by 31 priests and 7 deacons. In area the diocese is 8,495 square kilometres (3,280 sq. miles). It is thought that the diocese was constituted as far back as the middle of the 9th century.

The first occupant was styled Bishop of Fortriu, the name by which the kingdom of the northern Picts was then known. This bishop was also styled Abbot of Dunkeld, perhaps holding jurisdiction, formerly enjoyed by Iona, over the other Columban monasteries in Scotland.

Today, Dunkeld is one of the suffragan sees in the archiepiscopal province of St Andrews and Edinburgh, and includes the counties of Perth, Angus, Clackmannan, Kinross, and the northern part of Fife – including the cities of Dundee and Perth; and the towns of Montrose, Arbroath, Brechin, Kirriemuir, Forfar, Monifieth, Broughty Ferry, Blairgowrie, Coupar Angus, Pitlochry, Aberfeldy, Crieff, Callander, Auchterarder, Dunblane, Doune, Alloa, Alva, Tullibody, High Valleyfield, Kinross, Newport, Tayport, Kinross, Auchtermuchty and Cupar.