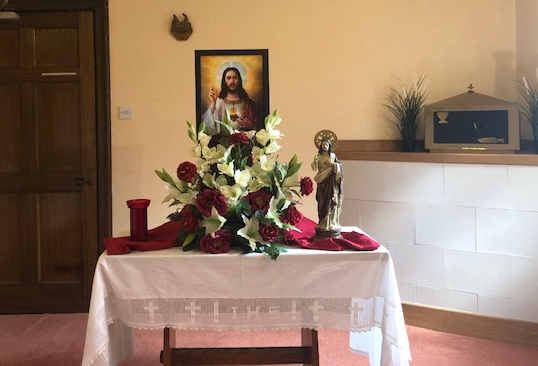 Fr Andrew Marshall writes – “When the Corona virus pandemic struck Britain and it became clear we were going to have to close the churches in order to prevent the spread of infection, we did not want to simply retreat to the sidelines and batten down the hatches until the storm passed.  We very much wanted to be in the midst of the battle standing with the people of the parish to strengthen them during the crisis, while at the same time maintaining the appropriate distance.  Thus, Mgr Ken proposed purchasing a webcam so that we could broadcast our Masses to give the people a little comfort and a sense of still feeling connected to the parish.  We anticipated how hurtful it was going to be for the people to be deprived of the sacraments and so we sought to compensate as best we could by using the modern wonders of technology to reach them.”

“Since installing the webcam in our little side chapel, the place has been filled with constant prayer.  We celebrate the Mass every morning and encourage people to make an act of spiritual communion while also reflecting on the readings of the day so that the people can at least receive their daily bread in the form of the Word of God for their nourishment.  We have also used the webcam to stream regular devotions.  We believed that good fruits could come out of this time of suffering and one of those fruits is undoubtedly the opportunity for the people to deepen their Catholic faith through these devotions.”

“Devotions to the parish patrons, St Peter and St Paul, have been organised so that the people could pray for their protection while getting some insight into the lives of these two great saints who are always watching over them.  We have been learning about the messages delivered by Our Lady to the world during the different Marian apparitions and various devotions have been organised to the Sacred Heart, the Divine Mercy, St Joseph, the holy angels and the Infant of Prague among many others.  We have also provided a Holy Hour each Thursday evening with reflections on the gift of the Eucharist and we have looked at the Eucharist through the eyes of various saints who experienced the power of Christ’s real presence there.”

“Then each Sunday evening the people have had the chance to participate in sung Vespers and Benediction.  Files with the different hymns and prayers have been sent out in advance via facebook and whatsapp so that the people could actively participate from their homes.  It has been an opportunity to open up the vast treasury of prayers and devotions that the Church has to offer and it has brought spiritual renewal into the lives of many, as well as much comfort in what could be considered a deeply distressing time.  We have even organised parish quizzes via the webcam to lift people’s spirits and they have proven very successful in creating a spirit of solidarity between the members of this parish and the people of other parishes beyond ours who have joined in.”

“Despite having almost no contact with our parishioners and residing in different homes, the webcam has provided everyone with the opportunity to feel connected to one another and the many prayers we have said together have succeeded in strengthening the bonds that we had already formed.  Our biggest worry at the start of this pandemic was that our people here would feel abandoned by the Church if she had to close her doors, but thanks to the many modern means of technology available, we have been able to reach people and have kept the parish active.  When this storm does pass, we do expect to see even more abundant fruits in the lives of the faithful, just as it has been a fruitful time for us priests.  When we do come back to the full practice of the faith that we love, we will surely have a greater appreciation for its beauty.”