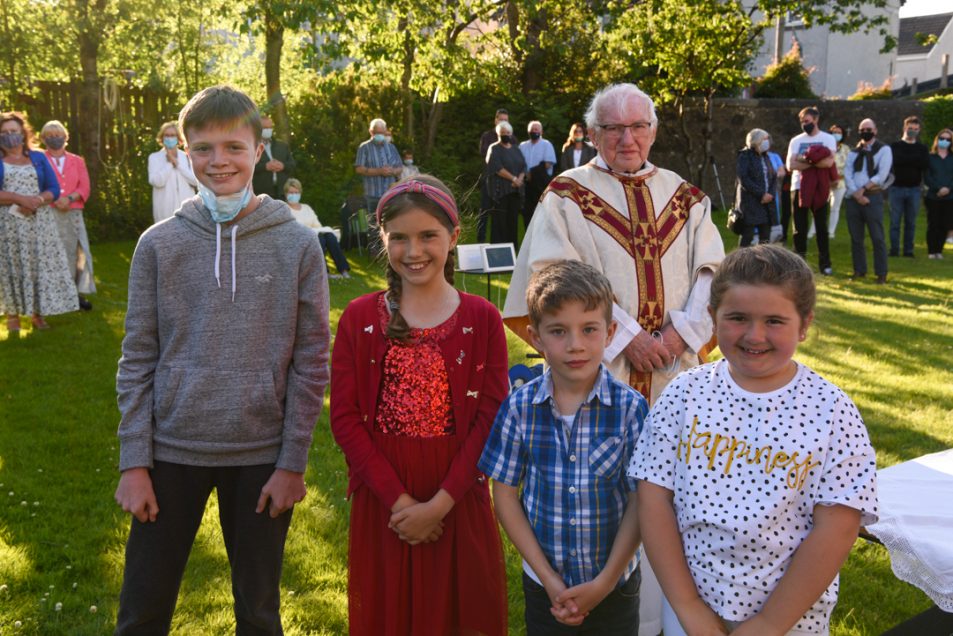 Parishioners of the Holy Family, Dunblane, gathered for Mass in the grounds of the SMA Fathers – the occasion was the 65th Anniversary of the Ordination of Mgr Basil O’Sullivan.

Born in Wales in 1932, Monsignor Basil O’Sullivan spent his youth in Cork, Ireland where he attended both the North Monastery School and St Finnbarr’s College. He trained for the priesthood at Dublin’s All Hallows College and, in 1956, became an ordained priest for the Diocese of Dunkeld, Scotland. Monsignor O’Sullivan then studied at Gregorian University, Rome, where he received his license in Canon Law. Subsequently, he became the chaplain at the University of Dundee, and then priest of two parishes before arriving at the Holy Family, Dunblane in 1988, where he has remained ever since.

Together with Bishop Stephen Robson and the priest of the deanery, Fr Mike Freyne MHM, Fr Michael Carrie, Fr Brian McLean and Fr Leszek Więcaszek SAC the celebration began with a series of presentations, announced by Mike Robbins, chairperson of the parish council. These were carried out by the some of the youngest parishioners – including a spiritual bouquet of prayers for Monsignor Basil, a cheque from the parishioners, a cake and a beautifully crafted scaled model of the Holy Family Church. Finally, a DVD with a series of video messages of good wishes from the wider parish, including those from Our Lady of Perpetual Succour, Auchhterarder.

Among those who took part in the Mass – Mgr Basil’s great niece, Georgina Blyth who read the first reading and led the Prayers of the Faithful.

“On behalf of all the priests, Religious and People of the diocese, I wish to thank him most sincerely for his wonderful example of priestly service to us all.  He has always been there for his people, through thick and thin, serving with fidelity and love.  I wish him Ad Multos Annos on this very significant anniversary, and God’s blessings on his future among us.”